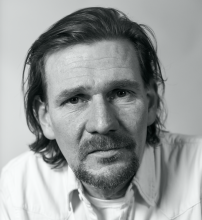 Born in Fort Worth, Texas, and raised in the Blue Ridge Mountains of North Carolina, Todd Hearon earned a B.A. in English from Baylor University before going on to earn an M.A. in Irish studies from Boston College and a Ph.D. in editorial studies from Boston University. He lives in Exeter, New Hampshire, where he teaches English at Phillips Exeter Academy.

Hearon’s books of poetry include Crows in Eden (forthcoming in 2022), No Other Gods (2015), and Strange Land (2010), which was selected by former U.S. Poet Laureate Natasha Trethewey as winner of the Crab Orchard Poetry Series Open Competition. He also is the author of several plays and the novella DO GEESE SEE GOD (2021) in addition to being an award-winning songwriter, having recently released his first full-length solo album, Border Radio.

Hearon has been the recipient of numerous awards, including a 2007 PEN/New England “Discovery” Award; the 2007 Friends of Literature Prize from Poetry magazine; a Dobie Paisano writing fellowship from the University of Texas at Austin; and a Paul Green Playwrights Prize. While at Boston University, Hearon co-founded the Bridge Theatre Company, a troupe dedicated to classical and contemporary verse drama.